The Florida panther (P. c. couguar – Puma concolor couguar) is a North American cougar that lives in tropical hardwood hammocks, pinelands, and mixed freshwater swamp forests of South Florida. It is a subspecies of puma, also known as a mountain lion or cougar — the last breeding population of the subspecies surviving east of the Mississippi River.

The panther was one of the first animals listed under the Endangered Species Act and is still one of the most endangered mammals in the world and the most endangered cat in North America. Wildlife officials estimate there are only between 120 – 230 adults and sub-adults left in the wild. Without the Endangered Species Act, the Florida panther, most likely, would no longer exist. In 1982, the Florida panther was chosen as the Florida state animal by a vote of elementary school students across the state. The Florida panther’s historical range extended from Florida to Louisiana throughout the Gulf Coast states and Arkansas. Today, they only live in the southwestern tip of Florida. With continued human population expansion, habitat suitable for panthers and other wildlife is quickly diminishing. 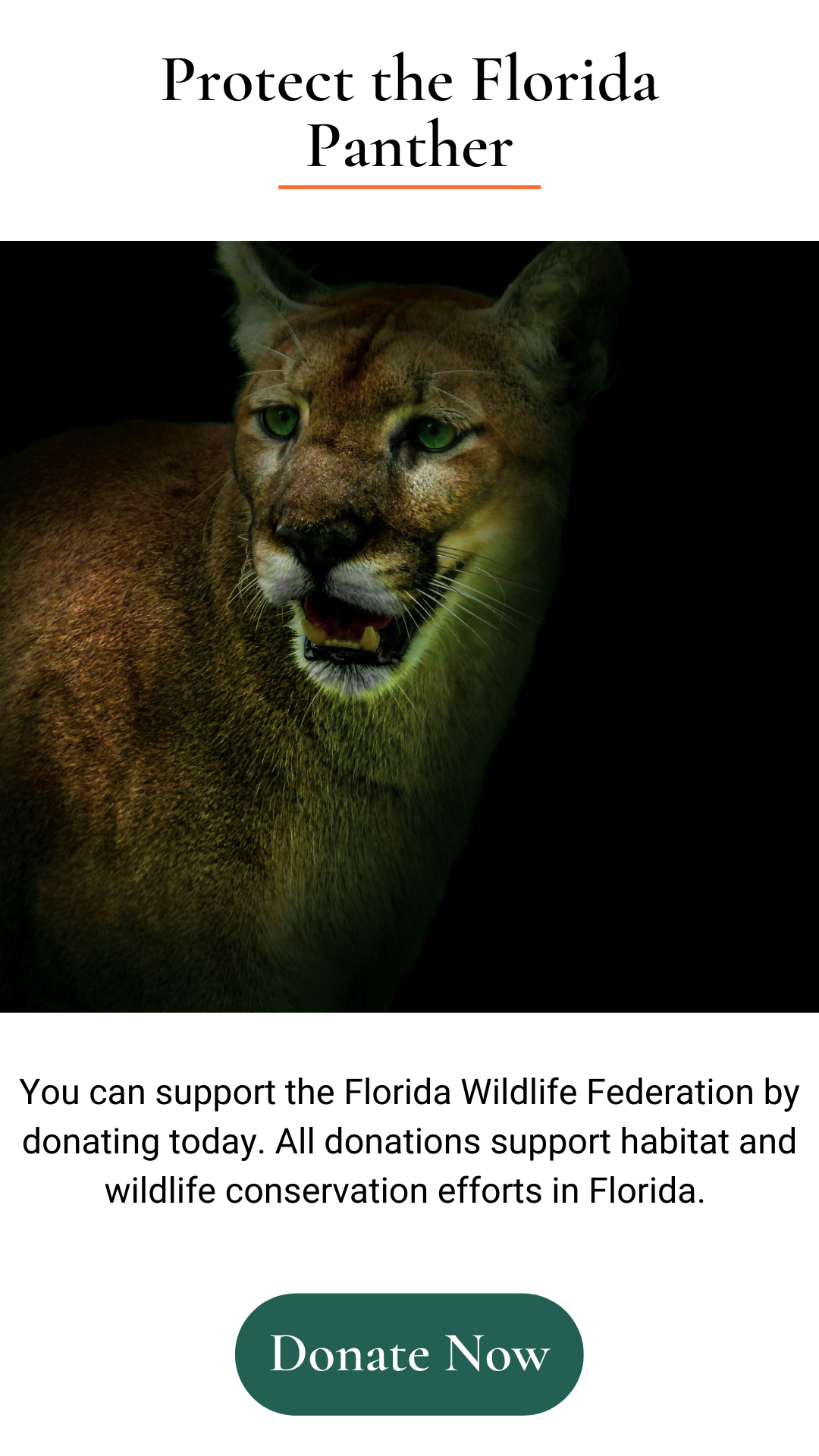 The Florida panther once ranged throughout much of the southeastern United States. Due to human growth and development, the Florida panther is limited to just a fraction of its historic range. Now, only a single breeding population survives in the southwestern tip of Florida.

More About the Florida Panther

Today, the primary threats to the remaining panther population are habitat loss, fragmentation, and degradation. Urban sprawl, the conversion of once-diversified agricultural lands into intensified industrial farming uses, and the loss of farmland to commercial development combine to reduce the amount of suitable Florida panther habitat.

Other factors include mortalities from collisions with automobiles, territorial disputes with other panthers, inbreeding, disease, and environmental toxins. All these other factors, however, also are related to habitat reduction.

Florida panthers are spotted at birth and typically have blue eyes. As the panther grows, the spots fade, and the coat becomes completely tan, while their eyes usually take on a yellow hue. The panther’s underbelly is creamy white, and it has black tips on the tail and ears.

In the 1800s, cougars were one of the most widely distributed animals in the Western Hemisphere. They ranged from Canada to the tip of South America and inhabited every region of the United States.

Florida panthers were massively hunted after 1832 when a bounty on panthers was created. They were perceived as a threat to humans, livestock, and game animals.

Cattle impacted the panther’s well being in the 1930s and 40s when thousands of white-tailed deer were slaughtered to eliminate the tick that causes Texas cattle fever. That severely reduced the panther’s food supply, and the species was nearly extinct by the mid-1950s.

Mainly due to hunting and habitat fragmentation, Florida panthers almost died out by the 1970s, when there were fewer than 20 specimens left. The remaining population was severely inbred.

In 1995, eight female Texas cougars were introduced into the population to infuse new genes, five of which bred successfully before being removed from the wild. Since then, the subspecies’ numbers have risen to around 200 individuals.

Large-scale depleting of wilderness areas for human development has further reduced their habitat and also their number.

Florida panthers are solitary, wide-ranging, and territorial animals, unless a pair is mating or a female has young kittens. A female panther’s range is usually between 70 and 200 square miles. Males require up to 250 square miles (the equivalent to 97,000 football fields!). If ranges overlap, male panthers will fight to protect their territory, and the dominant panthers usually secure better territories. They use pheromones and physical signs, like claw markings or feces, to define their territory.

Panthers can travel up to 20 miles a day. If running in short bursts, they may reach speeds up to 35 miles an hour. They are crepuscular, meaning they are most active at dawn and dusk.

GPS tracking has determined that habitat selection for panthers varies by time of day for all observed individuals, regardless of size or gender. They move from wetlands during the daytime, to prairie grasslands at night. The implications of these findings suggest that conservation efforts be focused on the full range of habitats used by Florida panther populations. Female panthers with kittens build dens for their litters in an equally wide variety of habitats, favoring dense scrub, but also using grassland and marshland.

The most recent taxonomic review was by Goldman (1946). Preliminary data indicated that this subspecies is genetically different from western U.S. populations (Roelke et al., cited by Maehr 1992). However, mtDNA analysis by Culver et al. (2000) indicated that Puma concolor was genetically homogeneous in overall variation across North America, relative to central and South American populations.

The population of free-ranging panthers in Florida is composed of two distinct genetic stocks; type A in Big Cypress National Preserve, and adjacent lands consists of descendants of historic F. c coryi; type B, residing mainly in Everglades National Park, consists of descendants of mountain lions with mixed Florida-South American heritage, which were introduced in the 1950s and 1960s (Barone et al. 1994).

The Florida panther is a large carnivore whose diet consists of small animals, such as hares, mice, waterfowl, and larger prey such as storks, white-tailed deer, feral pigs, and American alligators. They can also prey on livestock and domesticated animals, including cattle, goats, horses, pigs, sheep, dogs, and cats. When hunting, panthers shift their hunting environment based on where the prey is located. Female panthers frequently change both their home range and movement behavior due to their reproductive rates.

Panthers usually attack their prey from ambush. They can bring down a deer with a bite that severs the spinal cord at the spot where the neck and head join. A panther may take several days to consume its prey. Between feedings, they cover the carcass with leaves and dirt.

There is no record of a Florida panther attacking a person.

Mating season runs from October through March. Females reach maturity between two and three years old, and pregnant females have a three-month gestation period. One to four kittens can be born at one time. Once kittens are born, the mother prepares a den in a dry and protected place like a thicket.

At birth, the kittens have spotted fur and are especially vulnerable to predators because they are blind. As the kittens grow, their spotted fur fades, and adult panthers have a tan coat. The mother panther will spend about 2-3 weeks in the den nursing her kittens and only leaves the den to hunt. The kittens stay in the den for about two months before starting to accompany their mother on hunting expeditions. Kittens will stay with their mother for about a year and a half before leaving to form their own territories. Florida panthers live about 12 years in the wild.

The Florida panther is the only subspecies of mountain lion that remains in the eastern United States. Hunting decimated the population severely. It was one of the first species added to the U.S. endangered species list in 1973. The Florida panther’s current status is listed as endangered. Recovery efforts are currently underway in Florida to conserve the state’s remaining population of native panthers. This is a difficult task, as the panther requires contiguous areas of habitat – each breeding unit, consisting of one male and two to five females, requires about 200 square miles (500 km2).

The panther is considered to be a conservational flagship because it is a significant contributor to the keystone ecological and evolutionary processes in their environment. A population of 240 panthers would require 8,000–12,000 square miles (21,000–31,000 km2) of habitat and sufficient genetic diversity to avoid inbreeding.

The conservation of Florida panther habitats is especially important because they rely on the forest’s protection, specifically hardwood hammock, cypress swamp, pineland, and hardwood swamp, for their survival.

The Florida Wildlife Federation has been protecting Florida wilderness since 1936, securing and enhancing additional habitat for the Florida panther. To learn more about the Federation’s science-based policy approach to securing wildlife habitat and crossings, check out our current research projects.

In order to recover this endangered species, experts assert that three populations of at least 240 individuals each must be established with sufficient habitat to support these populations. Habitat protection is a major component of this recovery goal, but ensuring that habitat is connected is equally important. Since roadways bisect habitat, implementing wildlife crossings to allow for safe passage across roadways is integral to the recovery goal. Here is a public ArcGIS online program developed and maintained by the Florida Department of Transportation, District 1. The map legend can toggle different information to display roads with high panther death rates, existing wildlife crossings, panther vehicular mortalities, and locations of wildlife crossings. Each wildlife crossing also has a link to photos of Florida wildlife using the underpasses. It is updated as new information and data are received. 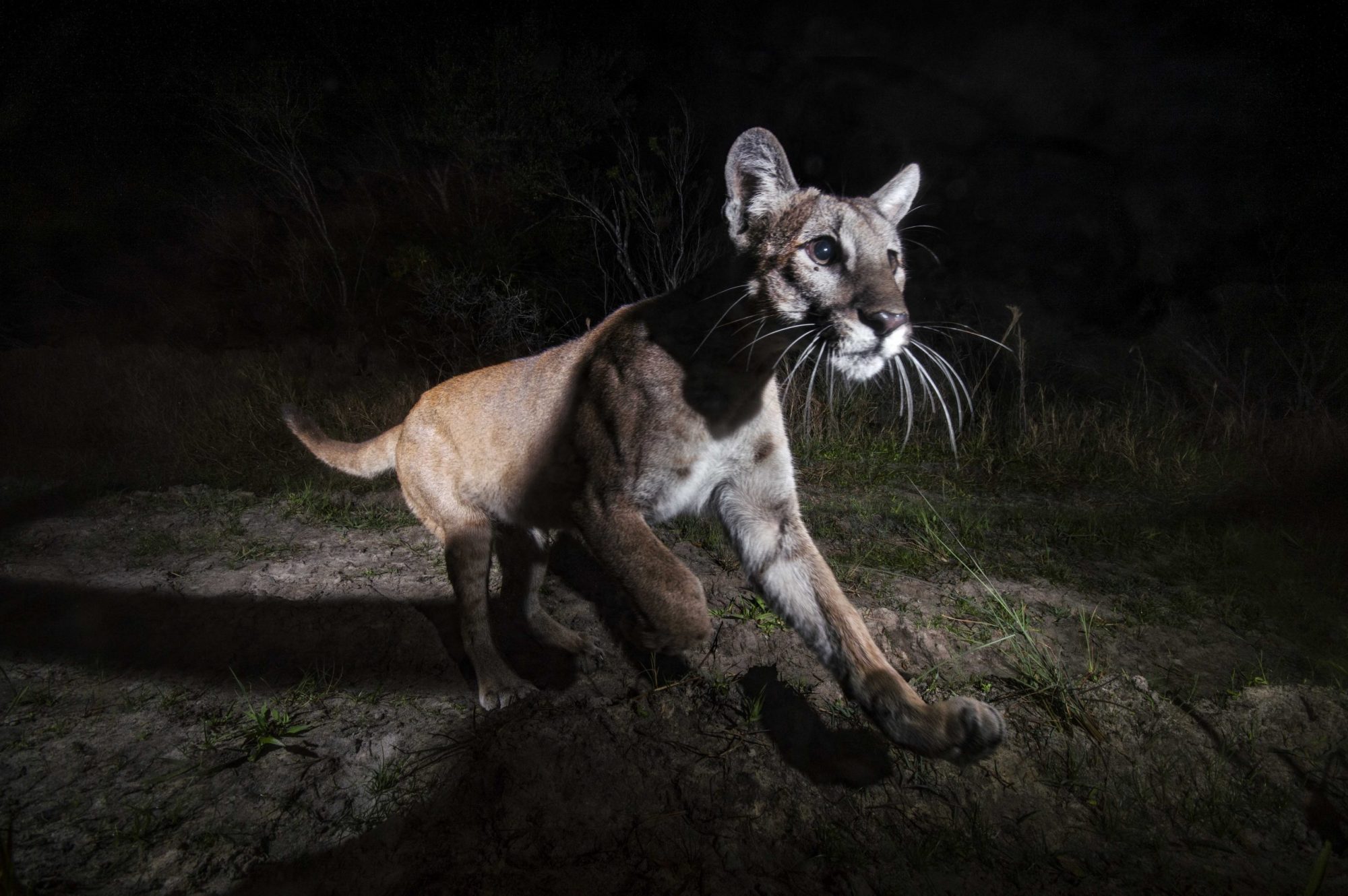 You and your whole family are invited to participate in a virtual panther quest. Complete the quest so you can better help advocate for conserving the endangered Florida panther. 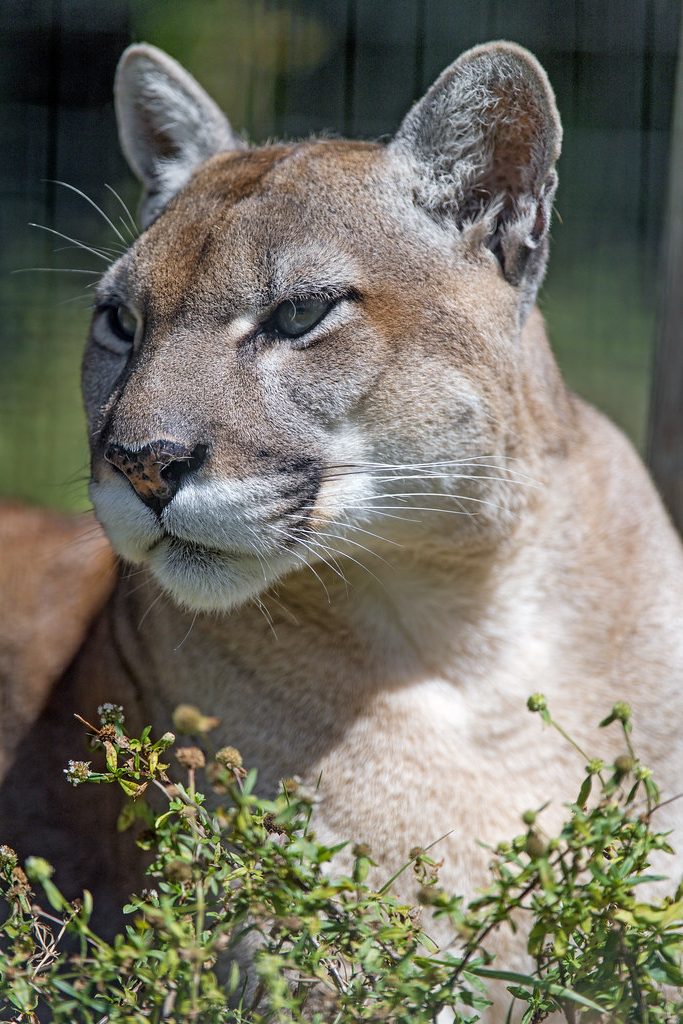 Latest news about the Florida Panther

Missed Opportunity for the Florida Panther

Why are Florida panthers important?

The Florida Panther is an umbrella species, which means they are the heart of the ecological community within their habitat. Protecting panthers in Florida indirectly conserves other threatened and endangered wildlife in the state.

How many Florida panthers are left?

Today there are less than 200 Florida panthers left in the wild. They are found in southern Florida in swamplands such as Everglades National Park and Big Cypress National Preserve. The subspecies is so critically endangered that it is vulnerable to just about every major threat. The Florida panther is currently listed as endangered and is protected under the Endangered Species Act.

The Florida Wildlife Federation has been protecting Florida wilderness since 1936, securing and enhancing additional habitat for the Florida panther. Our efforts are centered on land protection and public education.

If you respect them, they are very unlikely to attack you. Some animals, such as the Florida black bear and the Florida panther, have suffered from shrinking habitats due to human encroachment over the years and are now endangered species. This means they are more threatened by us than the other way around. A Florida panther attack on a human has never been documented.

What can you do if you encounter a Florida panther?

Encounters with Florida panthers are rare. But if you live, work, or recreate in the panther habitat, there are things you can do to enhance your safety and that of friends and family. If you encounter a Florida panther in the wild, make yourself appear larger, avoid crouching or bending over, do not run, and give the panther an easy way to escape.

When it comes to personal safety, always be aware of your surroundings. Florida panthers are most active at night. Exercise more caution at dawn, dusk and during the night, and never approach a panther.
Most panthers want to avoid humans. Keep children close to you, especially outdoors between dusk and dawn. Educate them about panthers and other wildlife they might encounter. Give a panther the time and space to steer clear of you and always hike, backpack, and camp when in wild areas with a companion.

If you live within the panther habitat, remove vegetation that provides cover for panthers. Remove plants that attract wildlife (especially deer). By attracting them, you naturally attract their predator— the panther. Deer, raccoons, and wild hogs are prey for the Florida panther. By feeding deer or other wildlife, you may inadvertently attract panthers. Wildlife food such as unsecured garbage, pet foods, and vegetable gardens also may attract prey. Roaming pets are easy prey for predators, including panthers. Supervise pets and bring them inside or keep them in a comfortable, secure, and covered kennel. Feeding pets outside also may attract raccoons and other panther prey. Where practical, keep chickens, goats, hogs or other livestock in enclosed sheds or barns at night.

Listen to the Florida panther